All
Category : Global strategy, Type of initiative * : Policies and strategies 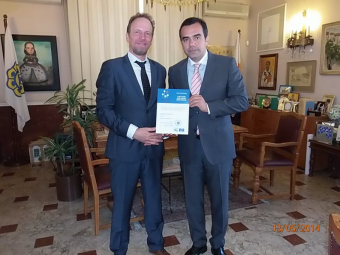 The Mayor of Nicosia, Constantinos Yiorkadjis, has committed Nicosia Municipality to support and take part in the Council of Europe "ONE in FIVE" Campaign by signing the Pact of Towns and Regions to stop sexual violence against children.

The Pact was signed in the presence of the Thematic Spokesperson for Children of the Congress of Local and Regional Authorities of the Council of Europe, Mr Johan van den Hout.

The Pact is an initiative of the Congress of Local and Regional Authorities of the Council of Europe and aims at involving local authorities in the Campaign, inviting them to post information about their activities, initiatives and policies in matters relating to children. It encourages them to share good practices with other European cities and regions.

The ONE in FIVE Campaign of the Council of Europe aims to stop sexual violence and abuse of children. The name of the Campaign refers to the extent of the problem where, according to surveys and studies conducted in European countries by UNICEF and the World Health Organisation, 1 in 5 of the total of 150 million children in Europe is currently victim of some form of sexual abuse.

The participation of the Nicosia Municipality in the Campaign demonstrates the commitment of the municipality to children and the protection of children's rights, and is an opportunity for it to implement more effective services, provide information and raise awareness.