An experience of democratic practices

The Children’s Parliament is an educational action which enables primary schools children to have a concrete experience of democratic practices.

Inspired by the prestigious National Operation of civic education, “The Children’s Parliament of Danmarie-lès-Lys” was set up in 2003 at the initiative of MP-Mayor Jean Claude Mignon. This action of the municipality, organised in partnership with the ministry of National Education, aims to develop children’s sense of active and responsible citizenship. The action consists in offering the possibility to every class of CM2 (last year of primary school) (roughly 12 classes, 300 pupils) to submit bills of law for a chosen theme each year different. The proceedings of this action are spread throughout the whole school year.

Developping the sense of citizenship

The Children’s parliament of Dammarie-lès-Lys is an educational measure which represents the municipality’s (along with educational teams and families) participation and support to pupils ‘learning of citizenship and  of their own rights and duties.

The main goal of the Children’s Parliament of Dammarie-lès-lys is to develop children’s sense of responsibility as citizens in the making.

Throughout the years different themes have been addressed: road security, urban renovation, eco-citizenship, healthy diet. The aim is to make pupils into responsible citizens who understand that everybody can, sometimes simply through their behavior, fight against inequalities.

Concerning the concrete approach, every class works on the writing of a bill of law with their teacher. Two bills over eleven are selected by a jury at the end of May and are sent to each class. Those bills are then collectively debated, each pupil expressing their preferences over the two bills. At the end of June, a plenary session is organised during which each group or class represented by a junior MP presents its vote intention, before the MP Mayor, Jean-Claude Mignon. 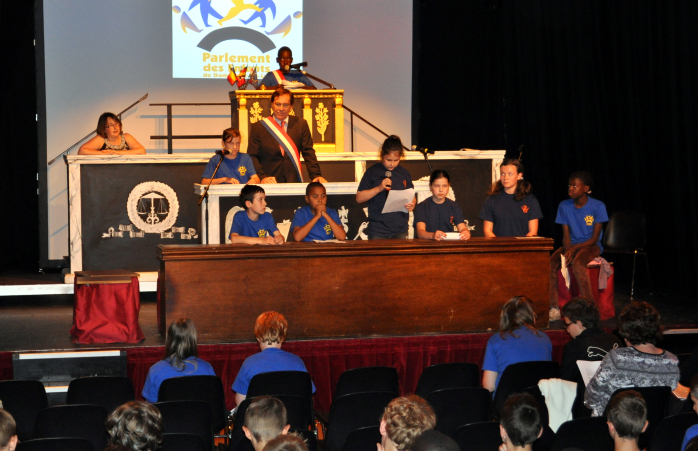