The establishment of the Association against Sexual Abuse has been launched in 1993 due to the awareness that victims of various forms of sexual violence, especially child victims of sexual assault and adult survivors of childhood sexual assault require more specialized skilled experts who as they were at that time available. The need to deal with this taboo topic was also important, which otherwise can very easily remain in the shadow of other problems.
The beginnings of the operation were within the Open Society Institute Slovenia (Zavod za odprto družbo - Slovenia), that brought in Slovenia the first knowledge about sexual abuse. The desire for greater demolishing taboos problem of sexual abuse, identifying consequences and effects of sexual abuse on the lives of survivors and therefor the opening up major opportunities for both early identification and disclosure of child abuse and to assist and support victims of sexual abuse, was thus the principal motive for the establishment of the Association.
Association against Sexual Abuse (Association) is a nonprofit, voluntary non-governmental humanitarian organization. Association was registered and it works for the whole of Slovenia, as well as Users of Association come from all over Slovenia.
Association is specialized in the field of child sexual abuse and other forms of abuse and violence, such as domestic violence. Violence in the family is not only often associated with a variety of child abuses, but it also itself represents a serious threat to the child. We also offer help and support to those who want to protect the child, and other users who are facing problems of violence (victims of rape, sexual violence, sexual harassment, etc.) and users seeking information and support or help to identify abused child or to take action. Association against sexual abuse has been closely observing for years consequently link between women who are victims of violence and their children who are victims of violence. In 75% of cases when the mother comes to the Association because of sexual abuse of her child, in the course of personal interviews reveal that she herself was a victim of sexual abuse as a child.
Demolishing taboos problem of sexual abuse, awareness, inform and sensitize the public to understand this crime and to support the identification and disclosure of victims of sexual abuse were the first goals, which Association followed. Today, the Association offers users many forms of practical support and assistance. In the public is known for its clear and professional grounded attitudes to the problem of sexual abuse, attitudes and impact of the change and to further amend the legislation by a specific commitment to children's rights and specific needs of child-victims and adult survivors of sexual abuse in childhood and the various forms of education.
The basic thread of the Association against Sexual Abuse is a constant commitment to children's rights which are violated in Slovenia.
We are also active with loud suggestions and requirements for the preparation of clear protocols that set the framework for the functioning of institutions and NGOs in identifying children at risk and duty of the state to protect them.

In the year 2012 we began with the initiative for the implementation of the European day “Fight against sexual abuse against children”.  We have seen that changes are possible, no matter how small they are. We have seen that Council of Europe is interested in addressing our initiative, for it was included in the Strategy for the Rights of the Child in 2012-2015. Therefor we encourage all of you outthere to take action and join us in the initiative within your own jurisdiction and influence and help us on a mutual path towards the fight against sexual abuse and broader awareness regarding child sexual abuse. 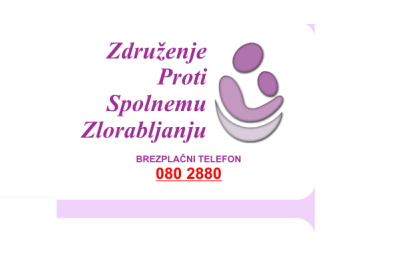